Torqazine-D (diesel) and Torqazine-AF (aviation fuel) are our tradenamed advanced synthetic fuels made via advanced Fischer Tropsch (FT) technology, and derived from natural gas or organic waste materials (food waste, municipal trash, crop residue, woody biomass, agricultural waste).  Torqazine-D qualifies for the petroleum diesel transportation fuel specification, ASTM D975, and can be used as a drop-in fuel in all diesel engines.  It requires no modifications to engine, power train, or other fueling equipment.

This fuel exceeds the Euro 5 specification for Ultra Low Sulfur diesel, in that it contains zero sulfur.

Torqazine-D is a paraffinic synthetic diesel fuel, which is hydrocracked to extract the paraffins (identical to the Fischer-Tropsch diesel produced by Sasol, the South African energy company).  However, unlike Sasol’s synthetic diesel, our fuel can be made from forest waste and other renewable waste materials. 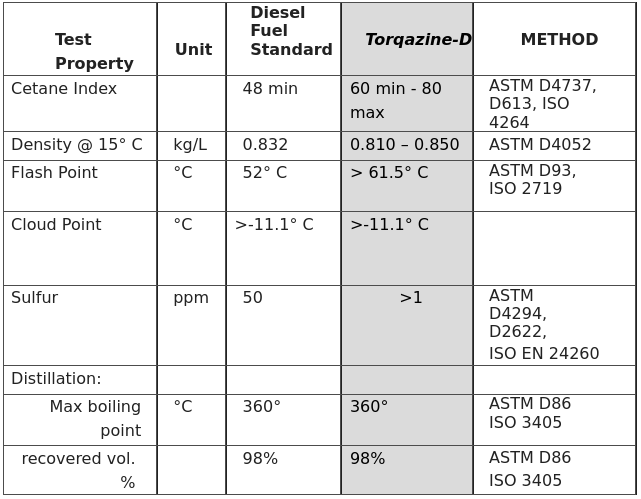 Mark E. Van Every, supervisor of the Black Hills National Forest (“BLNF”) asked our help in removing the dangerous wildfire hazard of 500,000 tons of beetle-killed trees on the ground in the Black Hills, and more being generated daily.

Our solution:  we will be removing over 180,000 tons per year of fire-prone materials from the Black Hills and will convert to advanced synthetic diesel and aviation fuel. The Newcastle, WY project will reduce the risk of forest fires and create approximately 80 jobs including chemical engineering managers, skilled labor and entry-level workers.

Because of the high jobs multiplier impact of this type of facility, at least 550 additional jobs will be created in the community for each job at the plant (1x7).

Our engineers have a solid track record of quality synthetic fuel engineering.  Our engineers’ woody biomass to jet fuel project (Red Rock Biofuels) has been approved by the Oregon governor for state bond financing.   A performance wrap guarantee is available for the plant processes front to end via Munich RE.

Originally developed by Franz Fischer & Hans Tropsch in the early 1920s, Fischer-Tropsch (FT) or GTL, is a series of chemical reactions involving the conversion of hydrogen and carbon monoxide into liquid hydrocarbons via catalyst (generally cobalt-based for natural gas and iron-based for biomass).  FT was originally used to convert coal to a diesel-type fuel.  During WWII this technology provided a significant portion of Germany’s fuel supply.  [1]

GTL technology has since been refined and is in use worldwide.  Sasol, a South African engineering company, has utilized GTL technology to successfully convert natural gas and coal into a high cetane synthetic diesel fuel since the apartheid era.

The Fischer-Tropsch process reacts syngas with typically a cobalt or iron-based catalyst, and transforms the gas into liquid products (primarily diesel fuel and naptha).

Fuels derived from GTL are of higher quality than fossil fuels, having no particulates and virtually zero sulfur.

Our fuel, Torqazine-D, is chemically similar to the GTL diesel produced by Sasol.  However, unlike Sasol’s synthetic diesel, Torqazine-D can be manufactured from renewable waste materials.

7.      What are some examples of other waste-to-fuel projects?

Our GTL engineering partners (Plant Process Group) have a solid track record of quality synthetic fuel engineering.  PPG IS currently in final ramp-up with a similar woody biomass to synthetic diesel and jet fuel project which was approved by the Oregon governor for state bond financing.   Performance wrap guarantee insurance coverage is available for these plant processes front to end via Munich RE.

The same technology is being used for our Rocky Mountain beetle-killed forest waste to synthetic diesel projects.